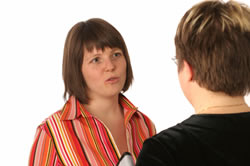 Boning Up on Bohm

David Bohm (1917-1992) was an eminent physicist, Professor Emeritus of Theoretical Physics at the University of London and a Fellow of the Royal Society.  He taught theoretical physics at universities all over the world—yet, this book is not about physics. It is a book about communication, within ourselves and especially with others, through the process of dialogue.

Have you ever been with someone only to realize that you have not heard a word he was saying because you became absorbed in your own mental world?  Or, have you ever watched people who held opposite views about an issue become so angry with each other that they stormed away?  We can see how the communication process beaks down:  thoughts, feelings, emotions, opinions all act as barriers.

How can dialogue help us to communicate?

Look first at the word “dialogue,” Dr. Bohm tells us.  Its roots imply a wealth of meaning.  “Dialogue” literally means “through the word.” An image may come to mind, suggestive of a stream of meaning flowing among and through people.  In contrast, “discussion,” the more accurate word for our common way of speaking with one another, means “to break things up.” It emphasizes the idea of analysis, where everybody presents a different point of view.  The purpose in a discussion is to win the conversational game.

Learning how to dialogue begins in a simple way.  A group of persons interested in exploring the process of dialogue begins to meet on a weekly basis.  People sit in a circle.  There is no agenda, there is no leader.  As Dr. Bohm suggests, there may be a group facilitator at first, whose function is to work herself out of a job!

What happens next?  Anxiety for some:  there’s nothing to do!  Then perhaps negotiation may take place, as group members adjust to each other and say, in effect, “I see your point.”  Yet anxiety and negotiation are only preliminary stages of dialogue.

In dialogue, the group members work to suspend their own opinions and assumptions.  (Suspension is a key point here.  To suspend means “to set aside, to make inoperative temporarily.”)  When a dialogue participant suspends her assumptions and opinions, she is better equipped mentally to take in the words of others, to look at and comprehend them, to understand them without reacting negatively or positively to them.  She thus has the possibility of becoming more familiar not only with her own thought processes but with those of others as well.

Over time, when this individual inner work of suspension occurs among all the members in a dialogue group, the possibilities for a deeper communication and consciousness evolve.

Dr. Bohm refers to this evolved stage as “participatory consciousness.”  Here we see “collective thought” about an issue taking place, i.e., people thinking together, working together, and communicating together in a common context.  There is no longer reaction against something anymore.  We see people developing sensitivity:  knowing what to say and how to say it; knowing when to be quiet; watching the subtle cues; watching body language; observing what is happening in oneself and in the group.  Dialogue is the key.

Can you imagine the wonderful possibilities inherent in dialogue?  Possibilities of peace within oneself, with others—a world of peace, a true flowering of all that is good and noble.

Dr. Bohm gave workshops on the process of dialogue all over the world:  to business groups, to religious groups, to scientists.  With the wisdom of his nearly 80 years of experience on this earth, he wrote, “It has become urgent that we communicate.”  It is with this sense of urgency, and with gratitude, that we read his words and learn to apply the principles of dialogue in our daily lives.

References and other information about David Bohm

Bohm turned his inquiring mind to many fields: quantum physics, creativity, dialogue, communication, cognition and the nature of thought itself.  There are numerous websites devoted to his work and ideas, among them internet dialogue groups.

The following list gives a taste of the range of his interests:

Some other books by David Bohm

The Ending of Time, with Jiddu Krishnamurti, San Francisco:  Harper, 1985.