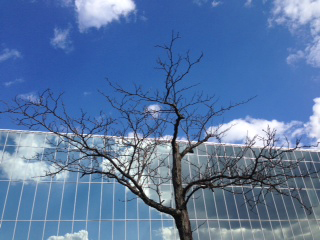 The unfolding of a new friendship began in a most unlikely place a little more than a year ago. My husband and I had been invited to attend a production of Thornton Wilder’s Pulitzer-winning Our Town at Sing Sing Correctional Facility by an organization that rehabilitates prisoners through workshops and classes in the creative arts. As we settled into our seats in the large Visitors Room, the prison’s theater for this classic play, Shedrick, a well-dressed actor, greeted us warmly.

After a powerful and poignant performance we moved through the crowd to congratulate Shedrick and tell him how much we enjoyed his role as Simon Stimson, Grover’s Corner’s church organist and town drunk. Our Town is a play that teaches us to stop, pay attention, savor life’s preciousness and live wide awake in the present moment. It seemed on the surface an unlikely play for incarcerated men in a maximum-security prison. Having met Shedrick, our connection to this fresh and potent interpretation of Wilder’s universal message was both emotional and personal. Soon after the play I emailed the staff at Rehabilitation through the Arts and asked about becoming penpals with our actor/friend. And so began a most unique and amazing journey of friendship behind the walls of Sing Sing.

For the past year we have had an unfolding relationship with our new friend, snail-mailing the old-fashioned way monthly hand-written letters. We share our goings-on, tell him about our family, the books and movies we read and see, the concerts we attend, and ask him questions about his experiences both before he was incarcerated and now. The slowed-down pace of our communication (inmates are not permitted access to the internet and cannot send or receive email) actually has had very positive benefits: we take our time absorbing Shedrick’s most recent letter and reflect on his thoughtful questions and insights before responding. The waiting time between our letters reminds me of the way I used to eagerly anticipate letters from my own family when I was traveling far from home.

Shedrick’s letters to us are remarkable. He is extremely articulate, inquisitive, bright and well-read. He explained to us that he owns many books, including the Complete Works of Shakespeare, which he keeps in his cell. He is hoping that there will be a production of one of the Bard’s dramaturgies and harbors the hope of playing the lead in Othello. Shedrick speaks often of his gratitude for life and the chance to grow from within as a person. He talks about taking seriously his responsibility for his own thoughts, words and actions and how treacherous prison relationships can be. He recounts his terrifying past, but he appears after ten years behind bars to be a very changed man. We look forward to every letter whose lively, energetic, sensitive words fairly leap off the page and into our hearts. There is so much to share and learn about each other.

After several months of enjoying the process of letter-writing, I contacted the prison to get permission to visit Shedrick and find out about correctional facility rules and regulations. We obtained permission so we decided to commit to monthly Sunday visits to Sing Sing. The prison is about a half-hour south of our house and we launched into our new plan last autumn. With a bit of trepidation but mostly a feeling of eagerness and determination we set off on our first Sunday to see our new friend.

Sing Sing sits high on a bluff overlooking the Hudson River in Ossining, New York. The view is breathtaking and expansive. As we passed through the first leg of security and moved onto the main building which houses the Visitors Room, we caught a glimpse of the river ringed by the Hudson Highlands. Once inside the prison’s front gate and seated at a table in an enormous space the inmates call “The Dance Floor,” we glanced through the big, plate-glass windows at the 14-ft. high chain-link fence reinforced with a double ring of razor wire. I felt the powerful juxtaposition of the river and the barbed wire, each a clear, visual symbol: one of freedom, the other of imprisonment.

The room was abuzz with voices, conversations in progress, families and children visiting their fathers, husbands and sons. Sing Sing is an all-male facility and we were quite possibly the only non-family members in a room of 150 people. Armed guards and officers were visible at all times on either end of the “Dance Floor.” At first it was all a bit daunting, but with the sound of children’s voices, laughter and a sense of real life in front of us, we felt a part of a very human landscape, albeit one we had never experienced before. Assigned to a particular row and table number we sat and waited until Shedrick arrived from his cell.

For two hours until visiting hours officially ended, we talked, joked and shared ideas, feelings and stories. To me our time together flew by and since then, each time we visit I feel the same way. We listen carefully and closely to all Shedrick tells us, taking it all in, responding and asking him questions about his hopes, his interests, his plans and dreams. He has told us he is a drummer and gives music lessons to a couple of inmates. He is working on plans for a possible concert in the new auditorium under construction. He has applied for an in-prison education program for the fall and is always busy reading. We are getting to know each other better as time goes by.

I love listening to Shedrick’s vibrant story-telling about his past: his eyes sparkle as he shares the painful and good experiences he has been through, including his remorse for crimes committed. (The verbal apology he makes aloud to his own victims he extends to me since he knows I was a crime victim four years ago in an armed robbery.) We feel joy in the growing connection between us and a strong sensation of being part of a greater reality than our own circumscribed lives. Once Shedrick mentioned that he had not had a visitor in eight years until we came to see him; now we are like his own family. He asks us for nothing, but we have enjoyed bringing him fresh apples and carrots, hoping it will help him maintain his health.

Since the beginning of our letter-writing, we have discussed in our letters and in person the subject of spirituality, transformation and inner work. Shedrick has asked me about Cafh and our path of unfolding. We all enjoy these discussions and sense the importance of conversing on this level. Time spent together brings us closer and deepens the friendship. Stereotypes and illusions about prisons and prisoners are being wiped away. I have become aware of my own ignorance and biases around the issue of incarceration. I realize, as Shedrick has so eloquently remarked, “What’s behind these walls is humanity.” Yes, real people, living, breathing human beings with hearts and minds who are hoping for freedom some day, to become better people, to transform themselves and to make new lives.

Our friendship with Shedrick is helping me to heal the past as a victim of a crime. And even more importantly, it is teaching me the lesson of opening to a wider reality, a greater understanding of people and life itself. When I am receptive and make space to know those outside of my comfort zone, I can free myself of old ideas and beliefs that no longer serve me. I expand my vision of who I am and who we all are: so very connected to this precious, mysterious path of life, helping to encourage and strengthen one another as we learn and unfold, one letter, one visit and one moment at a time.